The groups split up after breakfast. Kevin & Craig headed back to Bali. The rest of the adventure riders would head to Mount Tambora. But first they went south along the coast. The plan had been to head a little inland and then follow the northern main road to Sumbawa Besar, but we had heard good things about the roads in the south. As a result we changed the route and headed into the unknown. Again. 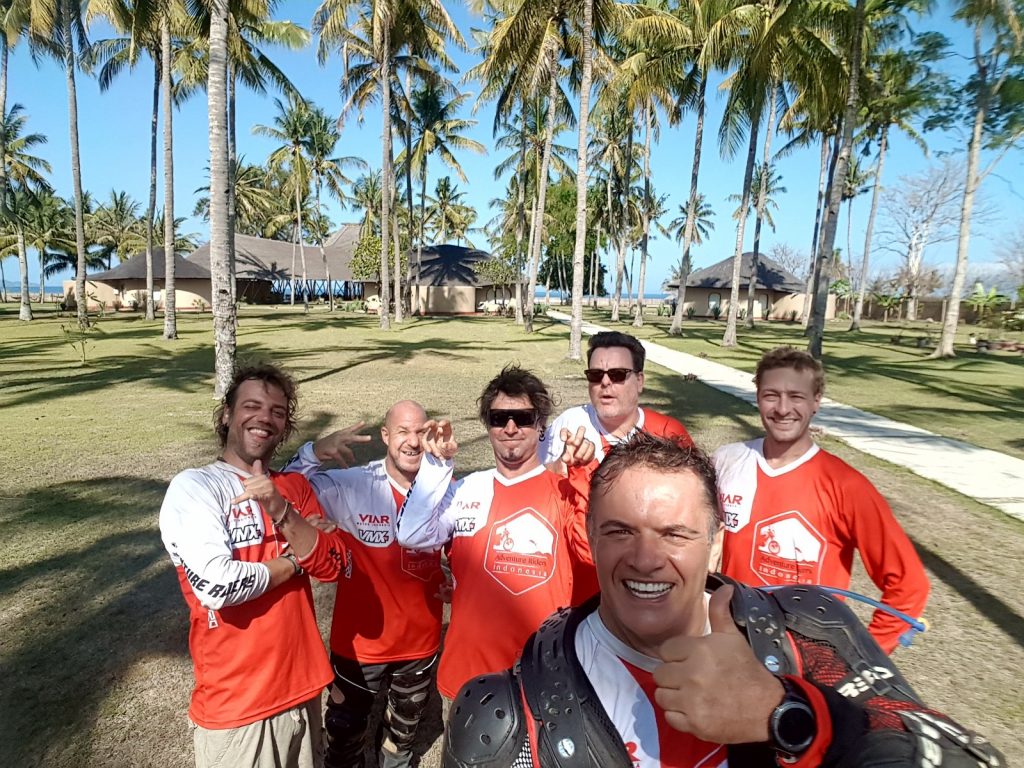 There were some great winding mountain roads in between lovely white sand beaches. The weather was great, sunny with a gentle breeze form the ocean. There was time for a little river ride in the middle of the day to cool off, before heading up on one of the bigger mountain passes. Allan spotted some wild hogs drinking from the river.

The roads got gnarlier the further towards the south coast we got. As a result it took longer time to cover the distance but it was much more fun. Finding a restaurant out this way is not easy, as so the boys settled for a pot noodle in the middle of nowhere. Great views and friendly people. 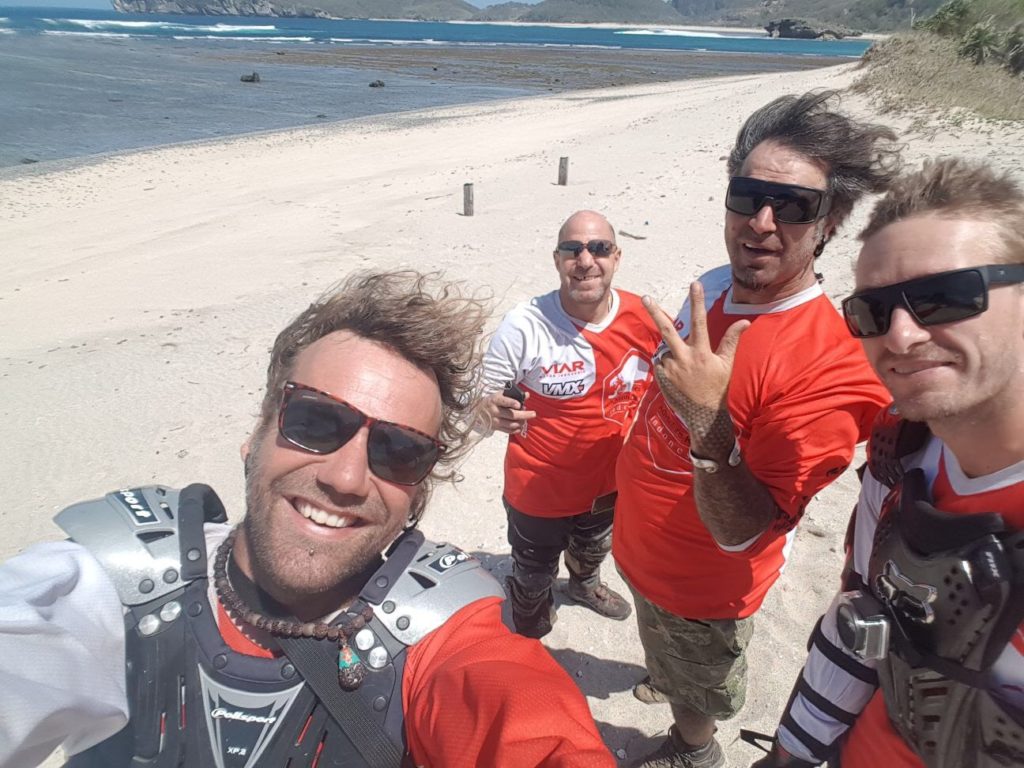 Once we left the south coast we headed towards Sumbawa Basar where we would stay at a little beach side hotel. The bikes would get a wash in the morning before heading out on the main road following the north coast. Getting through Sumbawa Besar in rush hour was something of a contrast to the small mountain roads earlier. Steve had to bunny hop a goat but we all made it to the hotel.

After getting the bikes washed we headed across the island to Dompu town. A little town without much to do except eat at the night market and get back on the bikes again the next day. They had good coffee at breakfast. The bikes were still outside. It was a great morning. 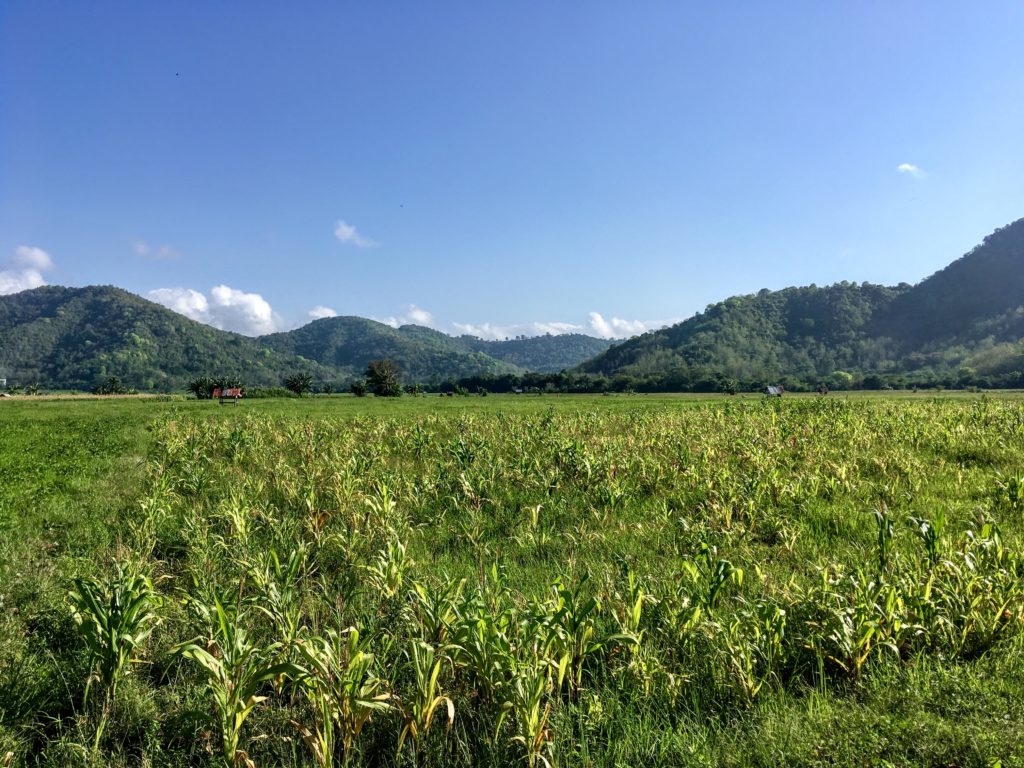 The two main attractions apart form the surfing is Moyo Island just off the coast of Sumbawa and the mighty Mount Tambora. Tambora is a stratovolcano. It erupted in 1815 in the biggest recorded eruption in history, as a result global temperatures fell. It was huge, a 45km tall column is estimated. The mount stood at 4000 meters before the eruption, it now peaks at 2850 meters. 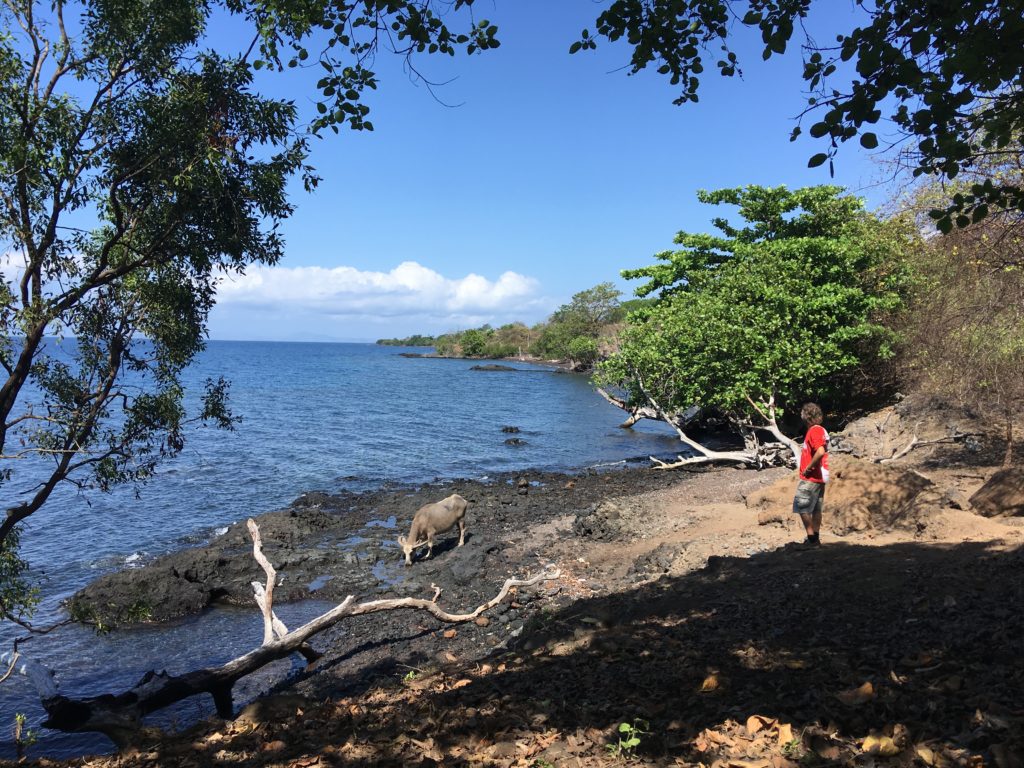 We didn’t come to Sumbawa only to see Mount Tambora, but it was something we all looked forward to. We left Dompu and took the road up the western side of Tambora. Allan had flown over a small crescent shaped volcanic crater sticking out of the water and the group went to see if they could get close on the dirt bikes.

There is a lot of interesting tracks between the little road and the coast. Single tracks made by cows and goats wind through blocks of volcanic rocks. When you stop and look at all the lave rocks and the size of them you start to realise the sheer force of these eruptions. We were getting close to the north side of Mount Tambora, just in front of Satonda Island. We headed up the volcanic slope because we found a google pin for a guesthouse. No information was available anywhere but it was certainly worth a look at.

There were no proper road just small tracks leading mostly up the mountain but in a zig zagging way, so we kept stopping to look at our google map. We followed Adam up the tracks as he had a map on his phone. We kept doing 3 left and one right turns. At one point we passed a small bakso noodle shop, and the local came rushing out pointing back the way we came from, but only the rear part of the group heard or saw them. After another 3 left turns we found what they were trying to point out. It was Ric, a resident dutchman who were involved in excavations near an ancient Tambora village. He also had a small coffee plantation and invited us in. 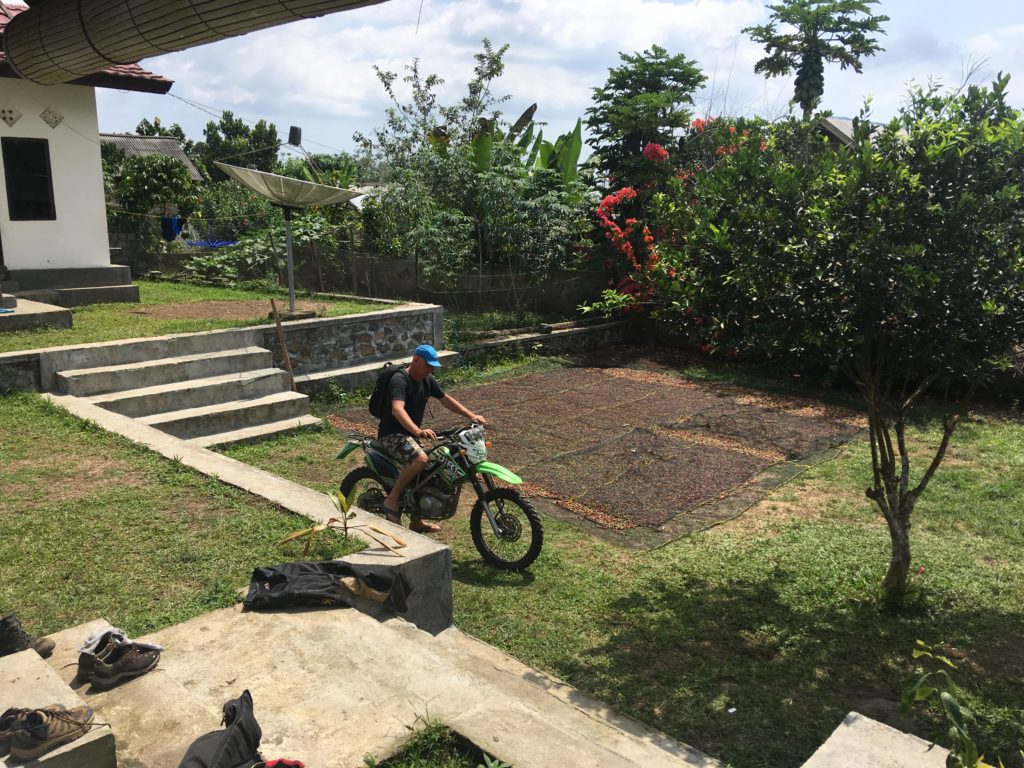 Mr. Ric also had a dirt bike so he took us on a little afternoon trip to a local Balinese temple, as well as one of the excavation sites from the Mount Tambora eruption. Allegedly a whole kingdom vanished in the violent volcanic eruption, and it is yet to be uncovered. We stayed the night at Ric’s place before our ride to Sape early in the morning. But not before we had another cup of great homegrown coffee.

Sape has a ferry port which leaves once a day for Labuan Bajo in Flores. We would ride clockwise around Mount Tambora on what looked like mostly dirt tracks on google earth. It was another hot day and the dirt bikes were kicking up a good trail of dust so we spread out a bit. Still, it was almost impossible not to get some sand between the teeth, and we had a good few water stops. It is also a stunning area, real off the beaten track, with hardly anyone else apart from an occasional goatherd or small scooter putting along the sandy tracks. 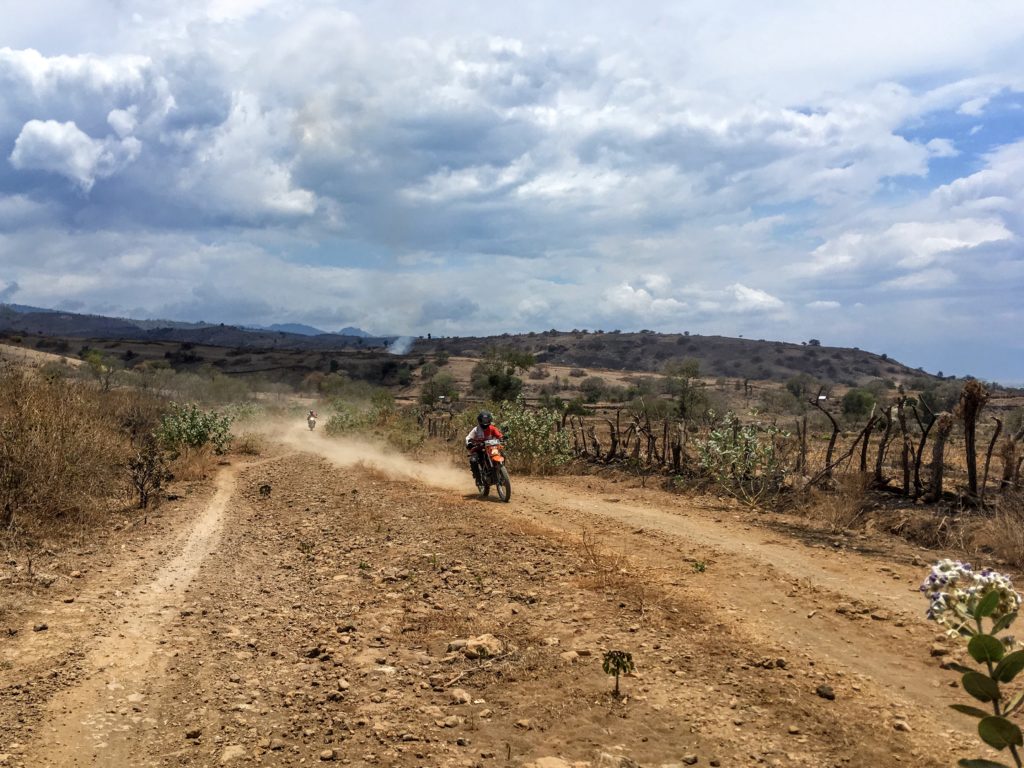 We arrived in Sape and went straight to the harbour to check the ferry schedule. The next one would leave the next morning between 0700 and 1130. No one knew anything more precise. We did meet Antonio Rosado from OUT OFF The Box – also looking for a ferry across to Flores for him and his BMW R850GS.

We found a small hotel just outside the ferry terminals gates on the main street and had some early dinner. While discussing the ferry crossing and the remaining days for the group, it was decided that Allan would continue alone to Flores and scout out the island. Adam would lead Ollie and Steve back across Sumbawa, Lombok and back to Bali.