This was another excellent trip to Batur with it’s black lava sand. It rewarded the adventure riders with an amazing sunrise as they descended into the volcanic crater of Mount Batur at 6am. Clouds were hugging the crater rim and as a result reflecting the scarlet hue or the rising sun. 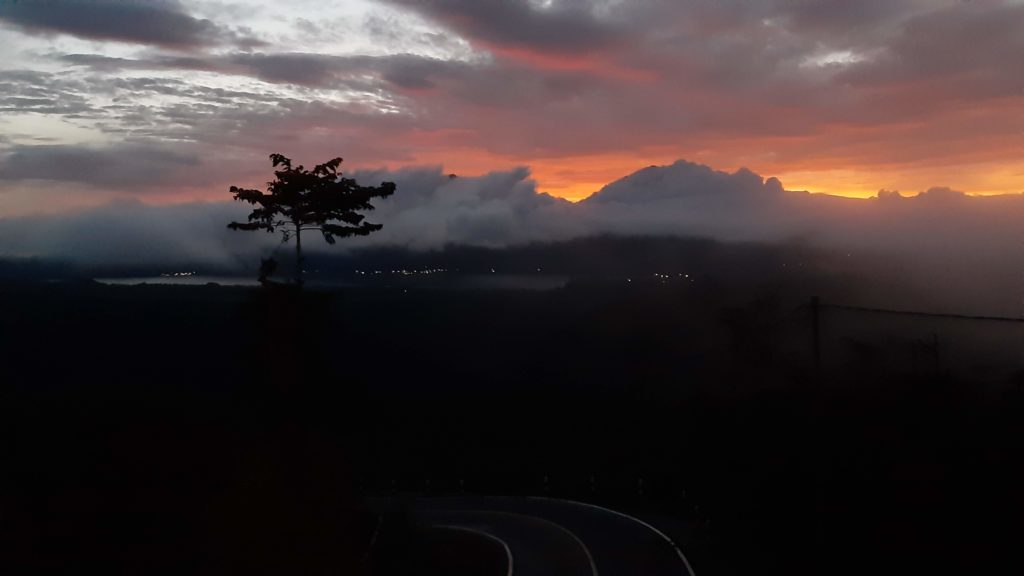 The adventure riders had come up through forest and mountain trails from Ubud the day before and stayed the night at a resort near the top of the Batur crater rim. It is a stunning view any time of day.
As the Adventure Riders Indonesia group of dirt bike enthusiasts arrived at the volcanic black lava sand they immediately took off in all directions. As the sun rose and the clouds disappeared you could hear the sounds of dual sport bikes gunning it up and down the slopes. 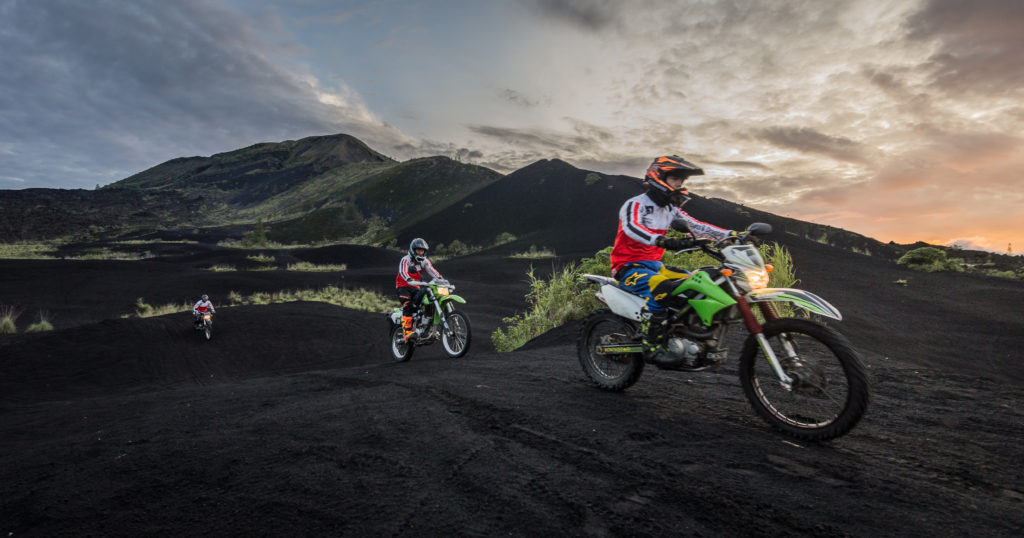 It is an amazing enduro playground. Steeps slopes, hill climbs, soft black lava sand and hard bumpy sections. As a result this gives the riders a diverse area to either hone their skills or just let rip. Big smiles everywhere behind sand splattered, steaming goggle.

After a few hours of fun dirt bike action in the volcanic black lava sand the Adventure Riders headed for the volcanic rock quarry. This area which surrounds the black lava sand is littered with volcanic debris from earlier Batur eruptions. Trucks drive in to collect materials from the quarry which leaves trails for the dirt bikes. These roads are rocky and twisty and it is possible to cruise through enjoying the scenery. However gunning it down the trails and drifting through sandy sharp turns is also a possibility. 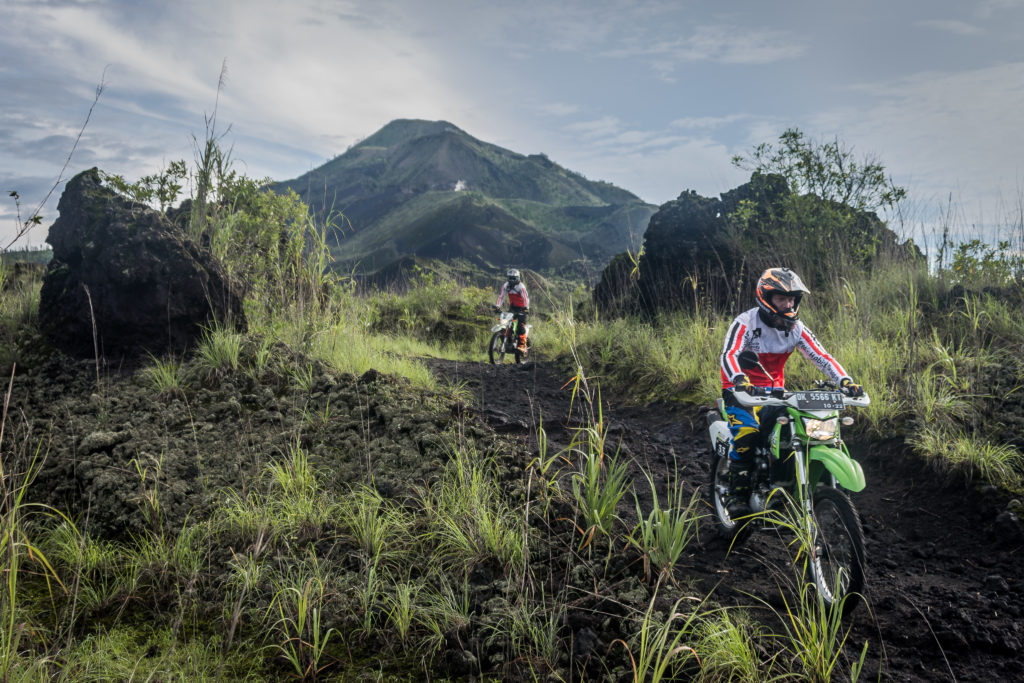 After a good morning workout on the enduro playground it was time for a coffee at the crater rim. The view is amazing when it is clear, and it offers a great opportunity to see the black lava sand from above. 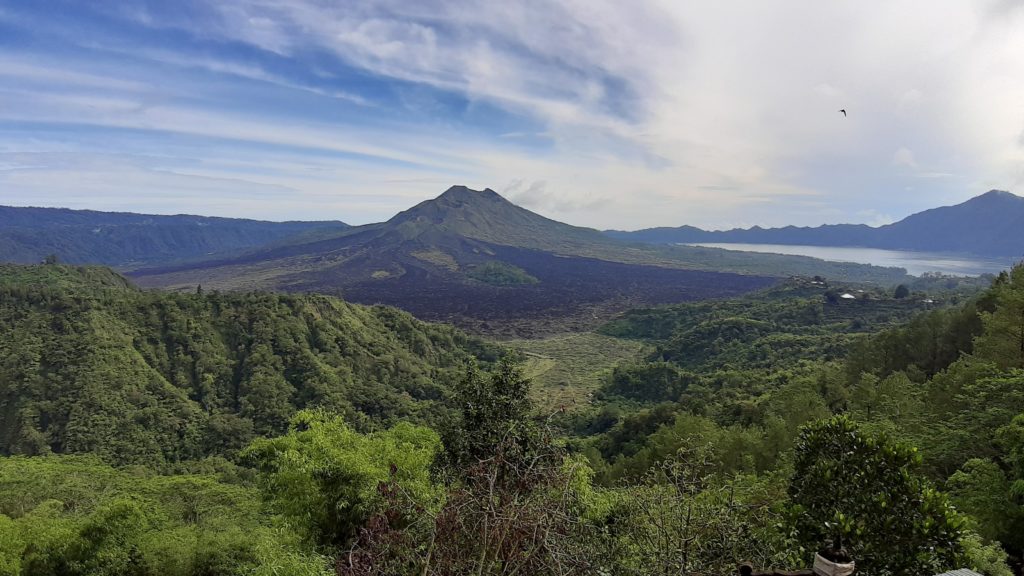 After a cappuccino and some breakfast the riders headed back into the crater to ride the shore of the lake. Small villages line the shore. At the far end there is a small road leading back up to the crater rim. There are a few roads descending down towards the North coast. A small gnarly mountain road lead the dirt bike riders through vegetable farms and fruit plantations. 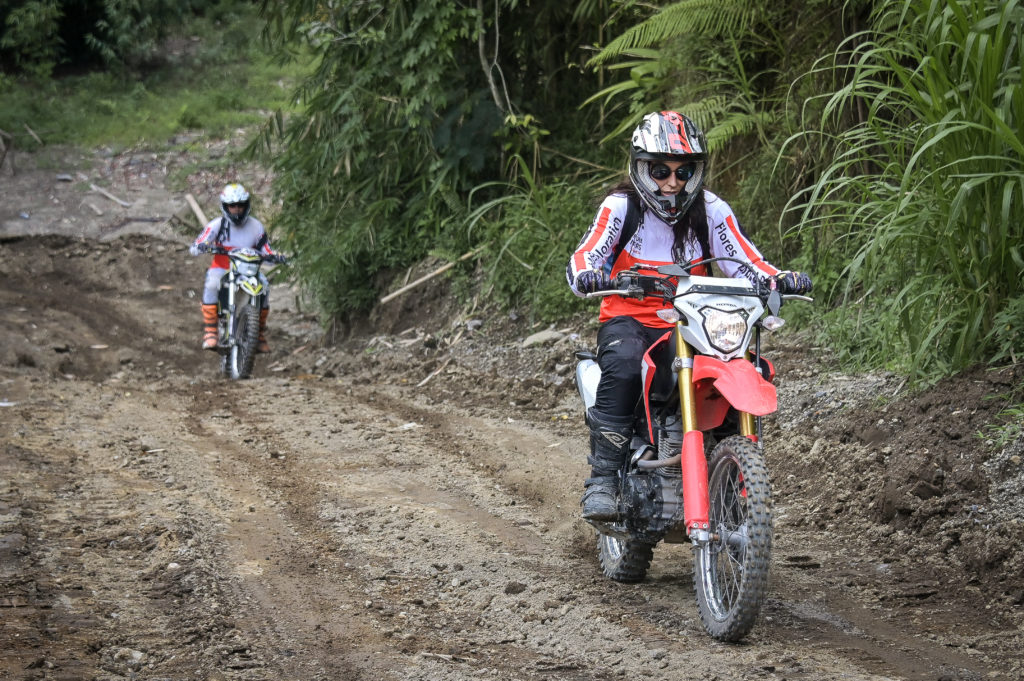 Heavy rain on the slopes of the mighty Agung volcano had flooded the road along the northern coast. One river had overflow and washed some of the road away. The traffic was halted until the rain stopped and the flow of water subsided. Both police and spectators urged us to ride through the water, but it was carrying big rocks, black lava sand and other debris with it. The group therefore decided to wait for the first big truck to cross so they could judge the current and safe route across.

Because of the rain the ride up the slopes of Mount Agung was off. Instead the group headed to the small fishing and scuba diving village of Amed. This would provide a great ride through a volcanic valley and up over the top of the crater rim. But not until the following morning after which the group would return to Ubud.

Rain Water washing down the slopes of Mount Agung

The beaches of Amed are usually a beautiful sight. Volcanic black lava sand beaches are host to white outrigger fishing boats with amazing blue water as a back drop. Today the water looked like ovaltine. Not great for a beach dive, but it would add nutrients to the reef. We also needed nutrients and went to Galangal a local restaurant on the beach road.

After a curry and a bintang it was time to look at the route for the following day before getting some much needed rest.

Through the Volcanic Valley

A quick breakfast and back on the bikes. The weather was looking great, but as it was the tail-end of the monsoon that could quickly turn. The riders found their way through the valley to where the small trails leading up the side of the crater started. It was getting hot, so lots of water breaks were needed. As we ascended we got a good view of the valley leading out towards the ocean and the black lava sand beaches of Amed. 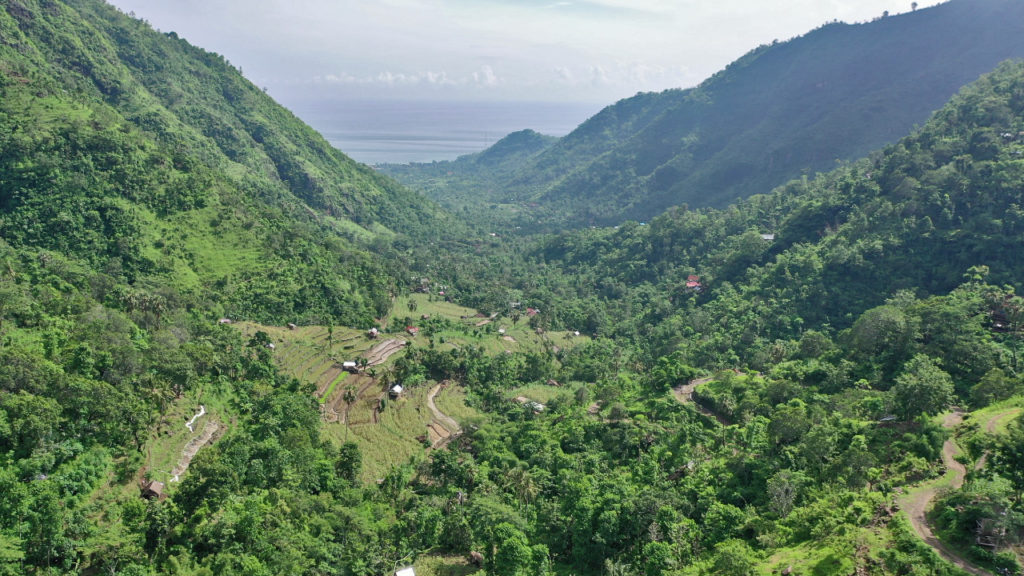 The roads got gnarlier and bumpier the closer to the summit we got. And it was turning into a very hot morning. But the bikes were handling the roads and the heat very well. We stopped to drink water and take pictures, and catch our breath. Soon though the air cooled as we reached the summit and started the descent into a great plateau with rice fields fed with water from the Agung volcano. 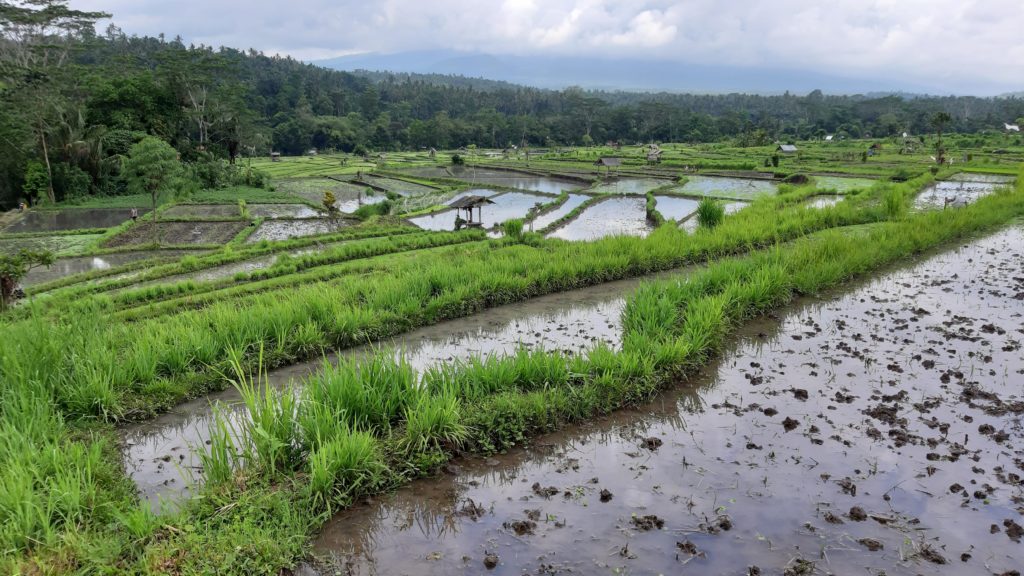 After a quick lunch with some amazing views the group headed back towards Ubud and still no sings of rain. It was close to Chinese New Year which traditionally signals the end of the wet season. Upon reaching Ubud the group met up for dinner and a sunset drink at the stunningly located Sayan House.

For news on special trips visit our facebook page